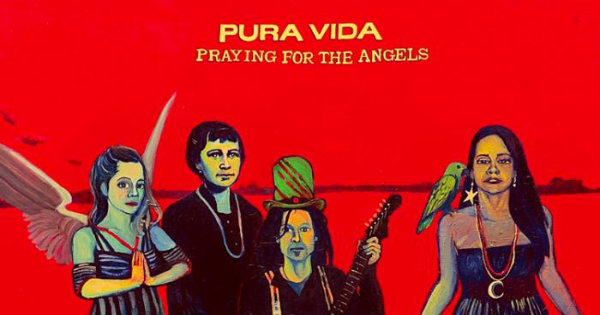 By: Kelly M. Walker
In: Biographical video
With: 0 Comments

One of Europe’s brightest bands Pura Vida led by Bregt De Boever, returns with new album Pray for the angels composed of 13 pieces that promise a unique musical odyssey.

As usual, the cover of the Belgian group’s album is a picture painted by Bregt De Beover himself and allows us from the first glance to enter the universe of the band and the opus. We open the musical experience with the song Heart of the Last Ark, a powerful dub instrumental track that puts into perspective a series of sound effects, each more creative than the last. Effects that are likely to appeal to one of their closest and inspired artists, who is neither more nor less than Lee Scratch Perry himself. We continue with Crawling a melody with a frantic rhythm accompanied by a sublime brass section conducted by Mathieu Vilain and Pieter de Naegel. Attached bathroom Song to Bob a song dedicated to the King of reggae, Bob Marley on which Aston “Familyman” Barett and his son Aston Barett Junior found. Pura Vida signs a beautiful roots track on the border of the blues, with guitar interventions to salute.

Arrive the song Come at the right time mystical and deep. Change of register with Fairly foreign, a little wonder, a spiritually soulful bluesy ballad sublimated by the voice of Puraman which reminds us of Nick Cave at times. We continue with the title Wild waters which mixes the voice of Nina Vitalia Schelfthout and that of Puraman accompanied by percussions full of sweetness and guitar solos full of echoes. Arrival the delicious O Sopro De Inae interpreted by Puraman and the Brazilian Alessandra De Queiroz, allowing her to reveal all her vocal talent. With this song Puraman once again proves Pura Vida’s ability to navigate different styles with skill and ease.

Huge crush for Find the way back, a roots-blues with just magical guitar playing, and perfect harmonies. Pray for the angels, the eponymous title of the album is once again a duet between Puraman and Alessandra De Queiroz, which gives the Brazilian the opportunity to testify once again to the beauty of her voice and her technicality. The Congos are partners of very long dates of Pura Vida, it is thus no surprise that we find Ashanti Roy on this album accompanied by Watty Burnett and Kenroy Kyffe. The three accomplices lead the vocal charge on a lively rhythm close to Nyahbinghi accompanied by a melodica and a distorted guitar sound. With the song named Blessing of the last ark, Pura Vida surely signs the most powerful and deep song of this new album. Pura Vida explores yet other musical genres with her track Dance of the spirit of the ancestors, supported by Mathilde Spruytte, in more afrobeat sounds, who develops her infinite musical competence. Piece of the penultimate Tropical storm, is a breath of fresh air in this album, a piece full of energy that has met a smile on your face. We end with Learn to let go, a song full of grace, with volatile synth notes and airy guitar notes. A track on which Puraman vocally approaches Tom Waits.