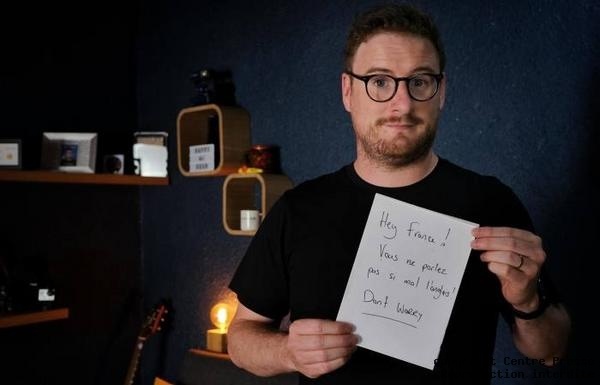 Paul Taylor, the “so British” ambassador of the French language

The British comedian is a delight when he affectionately mocks French speakers and their language. But he succeeds better than anyone in bringing cultures together and promotes dialogue.

We must face the facts. One of the most effective ambassadors of the French language and the Francophonie is perhaps … a British comedian! If he affectionately mocks – on stage and in his short programs – French and French speakers, Paul Taylor is better than a Channel Tunnel, it is a bridge between two shores. A “British” who knows how to bring together these French and British cousins ​​who love to hate each other so much.
This is confirmed every week by its live program (live) on social networks – launched during the first confinement – where French and English speakers lead questions to Paul Taylor and his guest. Around language exceptions, language tics or … recurring errors that make people laugh, he has managed to unite an entire community. “ I know they (his listeners) talk to each other outside of the shows, he says. They have meetings with the Zoom application, meet in real life ” and host each other.
But let’s not be mistaken. If Paul Taylor speaks French without any accent, it’s because he lived in France for five years when he was a child. However, like language to its mysteries, it also reserves its share of misunderstandings and pirouettes which are a mine of comic situations, mockery … and inspiration for him. ” But, I have to explain who I am at the start of the shows so that people who don’t understand me fully understand. Otherwise, they take me for a French! And the comic effect doesn’t work.

He resigns
Apple pour
to get on stage

Besides the contortions around the tongue, Paul Taylor is also distinguished by his incredible (and communicative) energy. “ I only started to be interested in stand-up during the last year of college, he says however. I wanted to be a director. From 14 to 20, I bought DVDs to watch the making-of (behind the scenes) films that I like. But from 11 to 14 years old, I wanted to be a wrestler! I think I’m not that far in mind! Like everyone who performs on his own, I believe that we are witnessing a kind of public validation, whether in laughter or in applause. But I remember that when I watched the wrestlers coming on television – it’s theater actually – they came down with the music and the whole stadium applauded, it did something to me. “
However, it was at Apple that he began his professional life. He even became a trainer for the brand all over the world. A job he loved and which was, by his own admission, ” very comfortable “. However, Paul Taylor hates comfort, routine or automatism. “I like when there are surprises, the unexpected. In fact, I like it when there are problems because you have to find solutions. ” Like when, despite three years of fruitful collaboration with Canal +, he prefers to concentrate on his second show.
Paul Taylor made his “Midlife crisis at 29”. In 2009, he returned to France for work. But the thrills of the scene he experienced a few years earlier in London pushed him to set foot on the stage again in 2013. “For two years, I worked for Apple and performed on stage at the same time. “ It was not until 2015 that he resigned to devote himself full time to his new activity.
And no question for him to touch the Assedics. “ My boss was Canadian, he did not know the French system. I was told about a conventional rupture but when I spoke with human resources, I did not insist. Deep down, I knew I wanted to work under pressure. I like having a deadline (deadline). I also ask my teams to fix me. It comes from my university years where, even if I had the time, I was getting into it at the last moment. I could have had allowances, that could have been cool. But I wanted to struggle ”, he confesses.
He read “ many biographies of comedians ” who tells “ their difficult beginnings, their rough living conditions with their company in a studio … Somehow, I wanted to find myself in this situation when it had never happened to me. It should push me to go on stage more often, to write, to succeed … I’m very English, it was my decision, I had to take responsibility. I wasn’t going to ask the government to help me put on my show. “

“Find a job
and keep it for life ”

It is often said that this risk culture is an Anglo-Saxon peculiarity. But for him, it is not so true. “ It is above all that we do not have safety nets in England as we can have in France. Me, I considered that it was necessary to have a start-up mentality (start-up company). I put all my savings into this project. Now I think it’s more of a generation thing than an Anglo-Saxon thing. My parents were raised by my grandparents who had known war. They tended to say “get a job and keep it for life”. We know that it is not the same today. And the new French generations know it too. ” Married to a Frenchwoman, Adeline, who now accompanies him on the administrative part of his activity, he is also the happy father of little Louise. “ It was tested with his birth. Until he was two years old ”, he smiles. Pendant Especially the confinement in an apartment. “On a lot of funny anecdotes, suddenly. “
But no question of asking him if he feels more French than English or the other way around. In his show British or almost, he explains that he hates being asked the question. It does not have to be. As a humorist, it is this duality that makes his singularity and the comic spring of his narration. As proof, the rooms it fills are getting bigger and bigger. ” We even do two dates at the Grand Rex in Paris! ” No need to leave aside English to make French speakers laugh. “You French people say you suck at English. But you’re not that bad “, he recognizes regularly. So it is sincere. This is not even British humor for once.

Paul Taylor’s father is English and his mother (May, who is seen regularly on her live broadcasts) is Irish. He studied languages ​​(he also speaks Spanish) before starting his professional life at Apple, especially in Quebec.
He made a name for himself with his first video, “La Bise”, seen several million times on YouTube. His first show, “Franglais”, takes up part of his annoyances with the French language.
For Canal +, he writes and shoots the short programs “Stéréotrips”, “What’s up France” and the most famous “What’s the fuck France” (nearly 600,000 subscribers on YouTube). With the actress Sarah Donnelly, he also carries out a method of learning English for Audible.
Finally, since the first confinement in France, he has been holding a live broadcast online (YouTube, Facebook …) on Monday evenings. The formula was enriched with a guest, spectators are invited to ask questions live. Paul Taylor has already received Verino, Bertrand Usclat, Olivia Moore, Swann Périssé, Les Coquettes or Donel Jack’Sman …

2021-10-09
Previous Post: Daphné B., François Garde, Claudio Morandini, Valérie Tong Cuong… the brief reviews of the “World of books”
Next Post: she pays homage to her father with her latest book